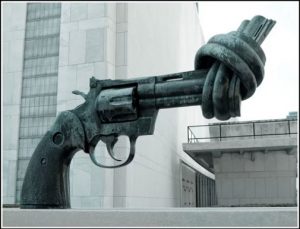 Another school shooting. Another mass murder. Blood is being shed before the eyes of their peers in real life. Innocent lives needlessly lost, cut short, leaving behind grieving fathers and mothers, siblings and friends, and a community giving way to tears. At the same time, there is this instant knee-jerk reaction of rage, trying to piece together what happened, pointing the blame, and calling for change. Social media becomes overrun with memes providing a quick and easy solution to the problem. But which side is right?

In the politically divided United States (Daniel 2:41-43), the “Left” blames easy access to guns, while the “Right” blames psychotropic drugs and mental illness. People in-between will cite the increase in violent entertainment such as tv, video games, movies, and music, coupled with the fact that parents aren’t parenting anymore, either because they both work out of the home or are otherwise failing to discipline their children.  So who is right, and who is wrong?

This is a complicated issue, and in fact, everybody is right. The rise in violence during these “last days” is the culmination of several factors (2 Timothy 3:1-5). There is no quick fix to the problem, as often suggested by the opposing memes on social media. Banning guns might have an impact, but there will still be a myriad of unregistered and illegal weapons out there, as will be wicked people with ill-intent. Paying closer attention mentally ill individuals or to certain prescription medications may help in some cases, while others go undetected or untreated. Obviously, raising well-balanced adults starts in the family, but the traditional family unit, often called the ‘building block of a strong society’, continues to decline. So if there is no quick fix, what about a long term solution? Will this ever be solved?

In reality, this is an age-old issue. The Bible acknowledges that men have dominated each other to the point of harm, often by resorting to violence (Ecclesiastes 8:9). As the weapons became more powerful, the victims became more numerous. Stones and clubs gave way to spears and arrows, which were replaced by guns and bombs. Millions of lives are being lost these days, and not just by soldiers, but also by adults and by children as in the case of many school shootings. Will the escalation of violence ever end? Not if it were to solely depend on people.

Jesus foretold that at his presence, there would be “on the earth anguish of nations, not knowing the way out because of the roaring of the sea and its agitation, while men become faint out of fear and expectation of the things coming upon the inhabited earth.” The accuracy of his words is seen reported in the news and on posts made to social media. People are heartbroken and in anguish, the masses are turbulent, and individuals are in fear, as a simple scroll through your newsfeed easily demonstrates. But Jesus also said it would be a time to “raise yourselves erect and lift your heads up, because your deliverance is getting near.” (Luke 21:25-28). Why?

In God’s eyes violence ruins the earth. In Noah’s day “the earth came to be ruined in the sight of the true God and the earth was filled with violence.” (Genesis 6:11-13) Hence, God took action, and ended that world of wickedness and violence with a flood. Jesus likened the end of this present violent world at his presence to the end of that ancient one: “For as they were in those days before the Flood, eating and drinking, men marrying and women being given in marriage, until the day that Noah entered into the ark, and they took no note until the Flood came and swept them all away, so the presence of the Son of man will be.” – Matthew 24:38, 39.

This time it will not be a flood, but the change will be significant and long-lasting. Jesus identifies the real solution to mankind’s problems in a couple sentences of a familiar prayer that millions of people repeat every day – “Let your Kingdom come. Let your will take place… on earth” (Matthew 6:10). God’s will is NOT being done on earth today. Jehovah hates violence (Psalm 11:5) and he hates death (Ezekiel 18:23, 1 Corinthians 15:26). Therefore, he promises that such things will not continue indefinitely. Just like before, God will take action.

Jesus identified God’s Kingdom as the means of ensuring that His will be done on earth. This is the same Kingdom mentioned in Daniel 2:44. This will not be the result of human negotiation or through international agreements. After describing a succession of world powers that would exist beginning in Daniel’s day down through our time now, we read “In the days of those kings the God of heaven will set up a kingdom that will never be destroyed. And this kingdom will not be passed on to any other people. It will crush and put an end to all these kingdoms, and it alone will stand forever.” (Daniel 2:44). Mankind is unable to adequately rule themselves (Jeremiah 10:23, Psalm 146:3). It’s not just that the Bible says so, but in fact human history and human misery has proved this to be true. People today are protesting for change because current laws aren’t working, and government isn’t doing enough. They’re right, and according to the Bible, change is coming.

EVERYTHING WE WANT FROM A GOOD GOVERNMENT 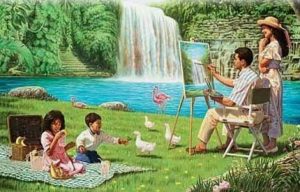 Peace for all children

“The government shall be upon his shoulder” says Isaiah 9:6 of Jesus Christ, whom he calls the “Prince of Peace.” While on earth, he demonstrated his love for peace and his distaste for weapons when he told his servants, “Return your sword to its place, for all those who take the sword will perish by the sword.” (Matthew 26:52). And this means no guns! None will be needed for war, because “He is making wars to cease to the extremity of the earth.” (Psalm 46:9). Nor will guns be needed for personal protection, for “They will actually sit, each one under his vine and under his fig tree, and there will be no one making them tremble.” (Micah 4:4). Subjects of the Kingdom will learn the ways of peace, and therefore “they will have to beat their swords into plowshares and their spears into pruning shears. Nation will not lift up sword against nation, neither will they learn war anymore.” (Isaiah 2:4).

Just imagine when “No more will violence be heard in your land or destruction and ruin within your boundaries.” (Isaiah 60:18). The reality of these promises will be experiences very soon, and you and your family can enjoy such wonderful living conditions. One of the grand themes of the bible is that “evil men will be done away with, but those hoping in Jehovah will possess the earth.” (Psalm 37:9). This is the very message Jesus preached, saying “Happy are the mild-tempered, since they will inherit the earth.” (Matthew 5:5).

To learn more about how to ensure a secure future for your family and children, click on the the links below for further information….