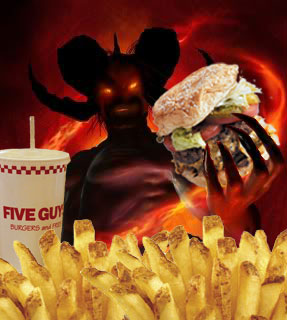 So there is a new burger joint popping up around here called Five Guys Burgers and Fries. I knew one was coming to Kent, as a while back, Susanne’s Coffee closed down and became the future site of Five Guys Burgers and Fries (another sad loss to the already deteriorating city of Kent Ohio). I happened across one in Montrose/Copley on State Route 18 when I left my current job in West Akron to get some materials around lunch time. Always being attracted to new sources of food, I thought I would try it for lunch.

Inside was interesting. There were boxes and boxes of potatoes everywhere, and several boxes of peanuts too. Plus, gallons upon gallons of oil to deep fry these spuds. All this was laying out in the dining room and actually served as the line leading up to the register. The peanut boxes were open and freely available to munch on while you waited in line or waited for your food.

I was immediately disappointed not to see any combo meals. I was looking at $5 something for a burger, $3 for fries, and about $2 for a drink. I don’t like dropping an entire $10 for lunch, and the thought of dropping it on a burger was really bothering me. But, I’ll try anything once.

Now this is where I was totally blown away. The small cup of fries that I thought was atrociously priced at $3 was actually enormous. They dropped my burger in the bag, an empty fry cup, and then proceeded to fill the cup and the bag with fries. I could have filled up on the fries alone, and I did, but I still had a burger to take on.

Well, this was not your ordinary burger either. This thing was colossal. What they did not tell you is that it is actually a double. Mine was loaded with cheese and bacon and what they call “everything” or “all the way”. Brave as I am, I took on this beast until it was no more.

Lunch was tasty and fantastic, but now I thought I was going to die. I know now why they call the place ‘Five Guys Burgers and Fries”, because I think I could have fed five people with my order. A quick look at the nutritional chart proved me right. My burger clocked in at over 1000 calories. My fries added another 650! So in one setting, and in under 10 minutes, I consumed enough food for the entire day. I felt like I was pregnant and in labor and still had to return to work!

It was super tasty, and I lived to tell the tale… so far. It is not a wise dietary choice to make on a regular basis. If I keep eating at Five Guys, I will need five bypasses in the near future. When I return, I will bring a friend to eat half the food with me, because I could have used a designated driver after taking lunch on today all by myself.

So in summary, the burger tasted great. Don’t bother getting fries, as trying to consume all that food may result in a loss of life. The downside is that your gonna drop $6 on a burger, that you can make just as well at home for a less. A Whopper costs half as much. However, expensive burger joints are popping up as if they were trendy these days (like Red Robin), so maybe I just need to accept that people will pay big money for something that takes no skills to cook. I can understand paying for good Mexican or Chinese food that is difficult to make, but a burger?

Maybe I am just starting to sound old 🙂