A common charge made against the New World Translation of the Holy Scriptures is that it is the *only* bible to translate John 1:1c as “the Word was a god” due to some sort of anti-trinitarian bias.

However, this is incorrect, as other translators, including known trinitarians, have seen something in the Greek grammar and context of the first chapter of John that made them render John 1:1 different from the traditional rendering “and the Word was God”. Here are some examples… END_OF_DOCUMENT_TOKEN_TO_BE_REPLACED

END_OF_DOCUMENT_TOKEN_TO_BE_REPLACED

The answer is No. END_OF_DOCUMENT_TOKEN_TO_BE_REPLACED

A Fort Worth Priest says he ended up in the hospital after a fight with Jehovah’s Witnesses earlier this week. The Priest is accusing the Jehovah’s Witnesses of attacking him, but fortunately a neighbor was an eye witness to the whole event and says the Catholic Priest threw the first punch. 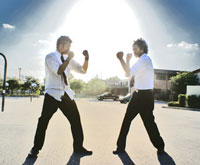 Two Jehovah’s Witnesses knocked on the door of Priest Parnell’s door and his daughter answered it. Within moments, Mr. Parnell intervened in the conversation and stepped outside, started backing the Witnesses off his property, and then started swinging at them. END_OF_DOCUMENT_TOKEN_TO_BE_REPLACED